Professor Willander is involved in research collaboration with Dr. Zaki Ahmed at COMSATS Institute of Information Technology (CIIT) in Lahore, Pakistan. In October 2012, they received a Swedish Research Links (Asian–Swedish research partnership programme) grant on SEK 750 000 for their project on “Generation of hydrofobic surface for improved corrosion and nano mechanical properties“.
See the full list of South Asia related projects given Swedish Research Links gants 2012.
Project abstract: Attempts have been made in recent years to mimic nature in engineering designs. Scientists and engineers have been inspired by the water and dust repulsion properties of lotus flower, water strider and butterflies to produce water and dust repellent engineering surfaces. This proposal aims to produce water repellent, dust repellent and antifogging engineering surfaces on metals. The objectives would be achieved by preparing a critical surface through sandblasting and chemical etching. Low energy materials such as polydimethyl siloxane (PDMS) would be used because of their intrinsic hydrophobic property. Special additive such as flour alkyl silane would be added to enhance hydrophobicity. The bumpy sites typical of lotus leaves would be created by laser etching. Experimental surface would be created examined by scanning electron microscopy. Contact angle measurements would be made to evaluate water repellency. Surfaces would be evaluated for water resistance, fog resistance, dust repulsion, environmental contamination. The success of the work would depend on how hydrophobic surface is obtained. The surface if properly developed will have the potential to be utilized in micro/ Nano devices, paints, transportation pipelines and textiles. 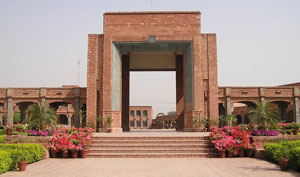 The Nano structure super hydrophobic surfaces would be prepared at COMSATS Institute of Information Technology (photo) and work on Nano indentation, surface morphology, X-Ray spectroscopy and wet angle measurements would be conducted in Sweden. The samples would be sent to Swedish University. whereas hydrophobicity has been done in the past, the work on the corrosion resistance and dust repellency is needed to be done. Successful collaboration would produce Nano structured anti-corrosion, anti-friction, anti-dust and hydrophobic surfaces for application in microelectronics, paints, navigation devices, navigation automotive and aerospace industry. The collaboration could make an industrial impact in Pakistan as well as in Sweden.

Project description
Dhaka Community Hospital (DCH) played a pioneering role in bringing the arsenic issue to the attention of the world by detecting the serious health problems caused by arsenic contamination in the ground water of Bangladesh. At present it runs many projects in arsenic affected areas, including testing of tube wells, awareness campaigns, patient management, arsenic mitigation and action research. The next step is this research field is to study the health effects of arsenic among children in Bangladesh. The infrastructure at DCH includes research staff, laboratory facilities, computer networks, and clinical staff that will facilitate the completion of this important project.