Alia Amir came to Linköping University on a foreign scholarship for PhD studies from the Higher Education Commission (HEC) of Pakistan – one out of 200 Pakistani MA students and PhD candidates funded by HEC at Swedish universities in a programme administered by the Swedish Institute between 2004 and 2008, more information.
Alia Amir has previously an M.A. in English Literature from Peshawar University, and another MA from Linköping University in 2008. 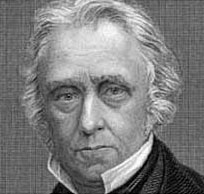 Her MA thesis in Linköping was entitled “Chronicles of the English Language in Pakistan: A discourse analysis of milestones in the language policy of Pakistan“. She compared three policies in Pakistan’s history, namely Lord Macaulay’s (photo) ”Minute on Indian Education”, 1835, the Constitution of Pakistan, 1973, and Educational policy, 2008. More information about the MA thesis.

Currently she is working for her PhD at the Department of Culture and Communication, and its Graduate School in Language and Culture in Europe. This is a collective name for the research that is conducted at IKK. The Graduate School thus comprises both the Department’s established research and its postgraduate education. In addition it includes the department’s  international Master’s programme.
Alia’s dissertation project focuses on English as a Second Language classrooms in Swedish schools with an ethnomethodological conversation analytic lens.
Zooming in on the policies actually practiced, maintained and co-constructed in a classroom, her ongoing research sheds light on how the participants actually police each other who are “doing being bilingual”. Her research interests are language in education and bi-/multilingualism in education (including policies and talk-in-interaction).

The second Nordic Interdisciplinary Conference on Discourse and Interaction (NorDIsCo) was held at Linköping University, Sweden, 21–23 November 2012. It was jointly organised by IKK and Child Studies department at Linköping University – Tema Barn. Alia Amir is part of the organising committee.
The aim of this conference was to bring together doctoral students and researchers in the Nordic and Baltic region who investigate discourse and interaction from different disciplinary perspectives. The conference highlighted research that explores how text, discourse, talk and social interaction are structured, organised and constituted. More information on the 2011 NorDisco conference.
The first NorDIsCo conference was held in 2010 at the University of Aalborg, Denmark. More information about the 2010 conference.