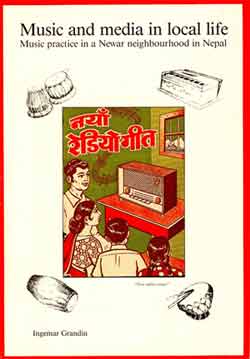 Associate Professor Ingemar Grandin defended his doctoral dissertation on ”Music and Media in Local Life. Music practice in a Newar neighbourhood in Nepal” at the Dept. of Communication Studies at Linköping University in 1989. The thesis was based on field work carried out during the late 1980’s when he was staying for several years in the town of Kirtipur in the Kathmandu valley. At the time he was affiliated to the Centre for Nepal and Asian Studies, CNAS, at Tribhuvan University.
Dr. Grandin returned to Nepal in 1993 and stayed in the country for five years. During this time he was connected to the Nepal Studies Group at the Centre for Social Research and Development, that published a magazine called ”Studies in Nepali History and Society” (SINHAS) from 1996 to 2002. Go for the web page of SINHAS.
Later, Ingemar Grandin has been involved in a research project on ”Music as an Invisible Popular Movement: An Anthropological Study of the Informal (Non-commercial) Musical Life in Contemporary Sweden”, financed by the Swedish Research Council.

At Linköping University, Ingemar Grandin has been the Director of the KSM four/three-year academic program, and responsible for the planning and development of the unit starting in 1996. He has been teaching at KSM continuously since 1997. He is now also affiliated to the Centre for Research in International Migration and Ethnic Relations (Ceifo), an inter-disciplinary research unit at Stockholm University.
Previously, he has worked as senior lecturer at the Dept. of Communication Studies, and been Deputy Head of Division, Tema Q – Tema Kultur och samhälle(Cultural Studies), also part of the Department for Studies of Social Change and Culture (ISAK).
Besides, he has been engaged as a music producer for the Swedish Radio Broadcasting (Musikradion, Sveriges Radio).

Recently, Ingemar Grandin has been involved in a research project network called ”The Creation of Public Meaning during Nepal’s Democratic Transition” driven by the School of Oriental and African Studies (SOAS), London and Martin Chautari (MC), Kathmandu. The network works with exploring the ways in which the meaning of socio-political events and developments is constructed, conveyed and consumed in Nepal, focusing first upon spheres in which there is already a body of analysis, such as the print media and FM radio, but also exploring less well developed areas of research such as Nepali theatre, film, rumours and conspiracy theories, TV, poetry and popular songs. More information about the network.

In October 2012, Associate Professor Per-Anders Forstorp was granted a project grant from the Swedish Research Council (total amount SEK 4.58 m in three years, 2013-15) for a comparative study in Educational Science. The project is entitled ”Beyond the national university: Global corporate universities in India, Brazil and Dubai” and will be carried out in collaboration with Professor Ulf Mellström, Centre for Gender Studies, Karlstad University.

Project abstract: Higher education worldwide is object to great challenges and changes and faces rethinking the idea and practice of universities. In this application two interrelated and general phenomenon are at the center of these changes and challenges: globalization and commodification. Following the neoliberal restructuring of global higher education we can observe increasing differentiation and stratification both regarding traditional national universities and new form for higher education. We can note the increasing degree of cooperation between universities on a global scale which results in mobility of teachers and students, mobility of careers, joint platforms for providing education and organization. We can also discern new actors on the market of higher education in the form of corporate universities with global ambitions. This project is situated at the nexus of these tendencies and developments through focusing on global corporate universities that are accredited. The aim of the project is to study three corporate universities and an international interest organization for corporate higher education (Infosys, Petrobras. Hult International Business School/Education First och Global Council of Corporate Universities). Based on field studies of these cases the questions concern pedagogy and learning, values and epistemology, and goals and motivations.