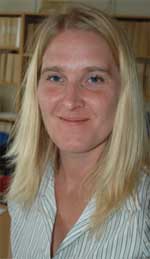 Ms. Conte shares her time between teaching at the nursing programme, and working as a nurse at the Intensive care unit at Huddinge hospital. Her ambition is however also to get into research, be admitted as a PhD candidate, and hopefully do a project that involves nurses and researchers at AKU in Karachi.

In November 2007, Maigun Edhborg received SEK 450 000 as a three years grant (2008–10) from the Swedish Research Links programme (funded by Sida and the Swedish Research Council) for the same project. More information on the Swedish Research Links grants 2007.
Abstract: This prospective cohort study has been carried out in collaboration with BRAC (Bangladesh Rural Advancement Committee) and BRAC University in Bangladesh, using both quantitative and qualitative methods. The aim was to describe the prevalence and the women’s experiences of depressive symptoms and anxiety around childbirth in rural Bangladesh, as well as its impact on birth outcomes, mother-infant interactions, and on the infant’s health, growth and development. A sample of about 720 women were interviewed by BRAC interviewers’ during pregnancy, 2-3 and 6 months postpartum, about personal- and social data, depressive mood, anxiety, attachment to the mother’s own parents and to the infant. Data about pregnancy and infant outcomes had to be collected by the interviewers. The infant was assessed on physical and mental development 2-3 and 6 months postpartum. During pregnancy and 2-3 months postpartum, some women with signs of depression and/or anxiety were interviewed in-depth about their experiences and adaptation to motherhood and the infant. As BRAC have access to community health worker throughout the Bangladesh, it was also possible to implement an early detection and treatment for depressive symptoms and anxiety in maternal and child health programmes. Several studies have shown that maternal depressive/anxiety symptoms have negative impact on the mother-infant relationship and subsequent negative development, in low-income countries both on the physical and mental development. Thus, it is important to detect depression/anxiety early and give treatment to the mothers’, to prevent the infant from negative impact on health, growth and development.

The project focuses on the fact that mental illness around childbirth, such as depression and anxiety, are common and disabling disorders in low-income countries, but often unrecognised and untreated. A network will be established between researchers at Karolinska Institutet, and at BRAC University in Bangladesh. The project area is in Mymensingh District.
The collaboration partners on the Swedish side are Dr. Zarina Nahar Kabir at the Division of Geriatric Epidemiology and RN Beatrice Hogg. The collaboration partners on the Bangladeshi side are Prof. Mushtaque R: Chowdhury, Dean of James P. Grant School of Public Health, BRAC University, Dhaka (also Deputy Director for BRAC); Dr. Kaosar Afsana, Program Coordinator, BRAC Health program; and Ms. Hashima-e-Nasreen, Research and Evaluation Division, BRAC. Hashima-e-Nasreen is currently registered as a PhD candidate at Karolinska Institutet.
(SASNET’s Staffan Lindberg and Lars Eklund visited BRAC and met Prof. Chowdhury in 2005. Read their report.)