The Folke Bernadotte Academy is a Swedish government agency dedicated to improving the quality and effectiveness of international conflict and crisis management, with a particular focus on peace operations. The Academy functions as a platform for cooperation between Swedish agencies and organizations and their international partners.
The Academy has a preparedness to offer good offices for conflict management initiatives, such as talks between parties to a conflict. Within its mandate, it serves as national point of contact with international organizations, including the UN, EU, OSCE and NATO.
The Academy aims for broad international participation in its activities, and cooperates closely with partner institutions throughout the world. It has been entrusted to coordinate the International Forum for the Challenges of Peace Operations and holds the Presidency of the International Association of Peacekeeping Training Centres. Through the Conflict Prevention in Practice Programme, preventive perspectives and methods are integrated in all relevant activities of the Academy.
The establishment of the Academy reflects Sweden’s commitment to international peace and security. It is named after Count Folke Bernadotte, who was the first official UN mediator. 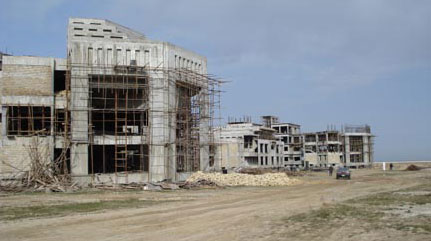 With Swedish military forces engaged in Afghanistan since 2002, this country currently plays an important role in Swedish foreign policy. In the Swedish government’s strategy on collaboration with Afghanistan, the Folke Bernadotte Academy and the Swedish International Development Cooperation Agency (Sida) have been assigned the task to develop civil support to build capactity in the northern part of Afghanistan. More information.
Research, studies and evaluation is one of its main areas of responsibility. In 2010, a delegation from Balkh University in Mazari Sharif in north Afghanistan visited Sweden in an effort to establish contacts with Swedish universities. Their visit included a tour to Lund University where they met representatives of its International Office and a few selected researchers.
Balkh University has recently been reconstructed, see photo.

Dr. Louise Olsson works as researcher and project leader at the Academy.
She comes from the Dept. of Peace and Conflict Research, Uppsala University, Sweden. Her research focuses on Peace operations and their effects for the local population, looking specifically at issues relating to UN Resolution 1325 (2000). In addition to her research, Olsson has conducted projects and arranged seminars relating to the implementation of Resolution 1325. For example, she contributed to the joint UNDPKO and Folke Bernadotte Academy ”Gender adviser seminar: Increasing dialogue and collaboration between the UN and Regional organizations” held in New York in April 2009. More information on her personal web page.
Louise Olsson has been involved in research on the situation in Afghanistan. In May 2009, she co-edited (along with Johan Tejpar, Development Economist at FOI) a Defence Analysis Report entitled ”Operational Effectiveness and UN Resolution 1325 – Practices and Lessons from Afghanistan”, on behalf of the Swedish Defence Research Agency, FOI. It is an analytical framework that has been developed and applied on five different Provincial Reconstruction Teams (PRTs) engaged in Afghanistan; the Dutch PRT in Tarin Kowt, the Italian PRT in Herat, The New Zealand PRT in Bamyan, the Norwegian PRT in Meymaneh and the Swedish PRT in Mazar-e Sharif. The work with the project was led by Dr. Louise Olsson, and was carrie dout during the period September 2008 to May 2009. Read the full report.
In November 2009, Dr. Olsson was awarded SEK 3.6 m as a three-years research grant (2010–12) from the Swedish International Development Cooperation Agency, Sida, for a project entitled ”Opportunities and Obstacles: Local Ownership of Development and Stability in Northern Afghanistan”. More information about the 2009 Sida grants.
Abstract: This three-year project, led by Louise Olsson, identifies and analyzes the opportunities and obstacles in creating development and stability through local ownership with international support in Afghanistan. In focus is the international approach to work strategically to strengthen the structure, influence and effectiveness of the Government of the Islamic Republic of Afghanistan in the areas where Sweden plays an important role for the development and security, namely the Northern Afghan provinces of Balkh, Samangan, Jowzjan and Sar-e Pol. This project will be conducted at Folke Bernadotte Academy.

Dr. Anna Jarstad is another researcher from Uppsala University (from the Dept. of Government), now working at Folke Bernadotte Academy. She is also involved in the research project on Local Ownership in Northern Afganistan, led by Louise Olsson. More information on Anna Jarstad’s research.