Acreo is a company with a mission to carry out contract research and aiming at technical development in ICT. Acreo’s role is to bridge the gap between academic research and industrial commercialisation. It is one of Europe’s leading research enterprises within the fields of microelectronics, optics and communication technology, and it has an active collaboration with several Swedish universities and university colleges. The head office is located in Kista but it has units also in Norrköping, Jönköping and Hudiksvall – Acreo FiberLab. 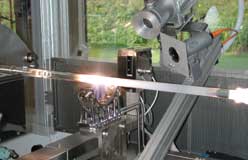 Acreo FiberLab, located in Hudiksvall, is a unique resource in Northern Europe open for customers and partners at Swedish and foreign universities, institutes and industry. The facility is equipped with the latest instrumentation for manufacture and characterization of advanced optical fibers. The company contracts R&D, participates in EU and collaborative projects, and have small-scale production, education and services. Acreo FiberLab is especially engaged in research in Electronics and Photonics (the science and technology of generating, controlling, and detecting photons, particularly in the visible light and near infra-red spectrum).
It is a member of the Fiber Optic Valley regional project. This is an effort to make the mid-Swedish region along the Baltic Sea between Gävle and Sundsvall (with approximately 400,000 inhabitants) known as the Fiber Optic Valley. Hudiksvall is at its center. The trade and industry in the region had its origin in the growth of the forestry and manufacturing industry after World War II. During the past 20 years, a great knowledge and experience in fiber optics has developed in the region. Ericsson Network Technologies has produced and developed opto-fiber and fiber cables in Hudiksvall since the beginning of the 1980s and Acreo FiberLab is situated here. More information about Fiber Optic Valley.

Within the framework for the so-called Fiber Optic Valley Innovation System, Acreo FiberLab has developed systems to facilitate the setting up of infrastructure in thinly-populated areas. Karin Nygård Skalman is involved in a project to compare possibilities for implement broad-band connections in Mid-Sweden and the region around Chennai in India. As Ericsson presently has two factories producing fiberoptical equipment in India, there is a hope that some form of research collaboration could be materialised.
In October 2006, Karin Nygård Skalman received a planning grant from the Swedish Research Links programme (funded by Sida and the Swedish Research Council) to do a pre-study for this project titled ”Broadband Access Deployment in Rural Areas of Sweden and India”. The study will be carried out in collaboration with an Indian partner, Dr. Ashok Jhunjhunwala from the Telecommunication and Computer Networking Group at the Indian Institute of Technology (IIT) in Chennai. He is a Professor of the Dept. of Electrical Engineering. More information about the South Asia related Swedish Research Links grants 2006.
Abstract: The aim of the pre-study is to address and study the deployment of broadband access in rural and suburban areas in India and Sweden with our research partners in India. Furthermore, we aim to investigate the possibilities to jointly develop end implement new innovative technologies, e-services and business models for the communities in the rural areas of Sweden and India. There exist differences in business models to rural areas in the two countries but still there are many similarities in providing same e-services over the network with different quality of service (QoS). We believe that this pre-study will show the benefits from a joint research collaboration between the two countries in terms of high technological exchange, cultural experiences and economical benefits. By merging the experience from Swedish National Broadband Testbed and the broadband wireless access technique corDECT developed by Indian Institute of Technology, Chennai will be the foundation for new innovative research in the areas of access technologies, E-services and business models in rural areas, both fiber and WiMAX technologies will be considered.