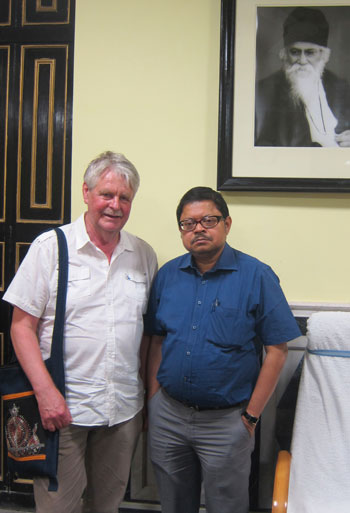 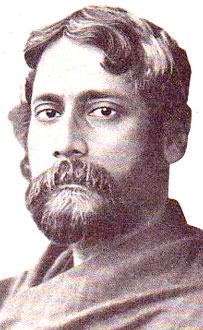 On Friday 27 February 2015, Lars Eklund visited Rabindra Bharati University and had a meeting with the Vice Chancellor Professor Sabyasachi Basu Ray Chaudhury at the university’s original Jorasanko campus in central Kolkata. This is the location of the Thakur Bari, the residence of the Rabindranath Tagore family, which is now converted into a museum whereas a part of the estate forms part of Rabindra Bharati University. However, the major portion of the university is located elsewhere, at Barrackpore Trunk Road (BT Road) in north Kolkata.

Rabindra Bharati University was founded in 1962 to mark the birth centenary of Rabindranath Tagore, and with the specific task to work for the advancement of learning and culture particularly in the branches of music, dance and drama. It grew out of what was called the West Bengal State Akademy of Dance, Drama, Music and Visual Arts that was established already in 1955. Dance maestro Uday Shankar, theatre personality Ahindra Chowdhury and musician Ramesh Banerjee were put in charge of Dance, Drama and Music respectively.
Prof. Basu Ray Chowdhury has been the Vice Chancellor since 2012, and he has another one and a half years left on his assignment. Basically he is a professor in Political Science, with a focus in his research on Social Justice. He informed about the university structure having three faculties, the Faculty of Arts, the Faculty of Performing Arts and the Faculty of Visual Arts, and 29 departments on both undergraduate and postgraduate levels.
The number of students is 8 000, out of which 500 are research students. 120 foreign exchange students are registered at the university, most of them coming to Kolkata through MoUs with universites in primarily Italy China, Japan, Canada, and Germany (Bielefeld University). As could be expected, the issue of credit sharing is still a major problem, Prof. Basu Ray Chowdhury admits
Out of the 120 foreign students, 55 are funded by scholarships from the Indan Council of Cultural Relations (ICCR). These scholarships cover the tuition fees, worth INR10.000 per month, and additional INR 6.000 as pocket money. 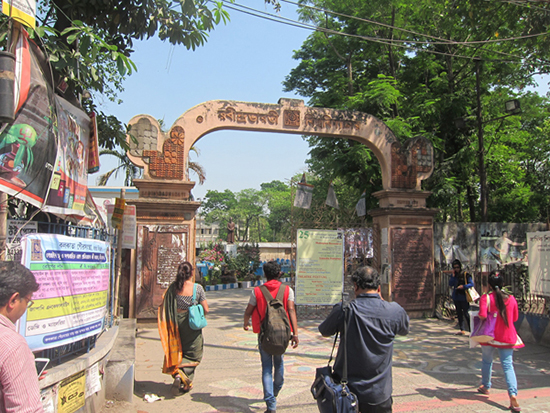 We had a fruitful discussion regarding the possibilities to establish collaboration with Swedish universities, and especially the home university of SASNET, Lund University. Besides the obvious choice to focus on the key areas within performing arts – instrumental music, sculpture, and painting – other disciplines taught at Rabindra Bharati University with a profile that easily could involve international collaboration are Polititical Science, Philosophy, Literature, and History. We discussed which Swedish univerities and departments that could be of interest for developing collaboration, that might lead to a Linnaeus Palme mobility programme.
Prof. Basu Ray Chaudhuri also proudly mentioned the School of Languages and Literature at Rabindra Bharati, offering diploma courses in Hindi and Bengali. Something that could be of interest for Swedish and other European students.
In relation to this, we discussed the issue of translating Rabindranath Tagore’s works from Bengali into Swedish. This extremely neglected issue was raised by the Embassy of India in Sweden in 2013 – the centenary year of Tagore’s Nobel Prize, asking SASNET to assist in finding people and institutions interested to join such a project. A similar project with China is already in progress.
Finally, the VC informed about the ambitious seminar series programme that Rabindra Bharati University runs, the Fistinguished Lectures series. See the announcement page.
On 2 April 2015, Prof. Partha Chatterjee will hold the 8th Rabindra Bharati University Distinguished Lecture, on ”Nationalism, Cosmopolitanism, Internationalism” at Kabi Janani Sarada Kaksha, Emerald Bower Campus Rabindra Bharati University, B. T. Road campus. All are welcome. See the invitation.
The university also runs an equally professional new publications series, Occasional Papers, that was launched in 2014. The two first volumes are written by Professor Sekhar Bandyopadhyay who is te Director of New Zeeland India Research Institute, on ”Texts of Liminality. Reading Identity in Dalit Autobiographies from Bengal”; and by Dr. Ranabir Samaddarwho is the Director of the Calcutta Research Group, on ”What is Diakogue? What is a Dialogic Situation?”. 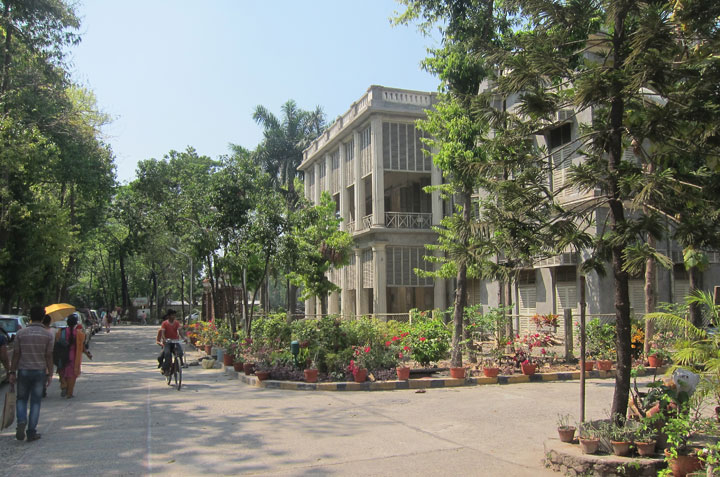 Two weeks later Lars returned to Rabindra Bharati University for a new meeting with the Vice Chancellor Sabyasachi Basu Ray Chowdhury, but this time to the main campus at Barackpore Trunk Road (BT Road) in northernmost Kolkata, close to the Indian Statistical Institute (ISI). The BT Road Campus is also connected to the Tagore family, since this was also one of their estates, with a beautiful 300 year old garden house, that is now hosting the Vice Chancellor’s office (photo to the right).
We continued our discussion on possibilities of collaboration and Prof. Basu Ray Chowdhury mentioned that Rabindra Bharati University plans to introduce a summer school that foreign students may join. He also mentioned tat the university has formal collaboration with Lodz University in Poland, and the VC will go there during the spring 2015. 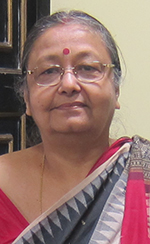 Another news that was given was that Rabindra Bharati University plans for further expansion, by establishing a third campus in Kolkata, actually in one of the new built townships east of Kolkata proper, in Rajarhat New Town. Here a number of new disciplines will also be launched, a Faculty of Law. a Department of Forensic Science, and a Department of Architecture.

While at the office Lars also by chance met Prof. Tapati Mukherjee, Head of the Music department (Sangeet Bhavan) at Viswa Bharati University in Shantiniketan. She had come to Kolkata to hold a guest lecture at Rabindra Bharati on the issue of Upanishad influences in Rabindranath Tagore’s poetry. Lars had met Prof. Mukherjee once before, when the Lund International Tagore Choir visited Shantiniketan in November 2013 and gave a conscert for the students at Sangeet Bhavan (more information).

For a good part of the afternoon, Lars strolled around at the BT Road campus, visiting departments, especially these belonging to the Faculty of Fine Arts. It was impressive to see the high quality of teaching and the splendour of the artistic work produced by the students, in art, sculpture, instrumental music, dance and singing. Since Lars himself knows how to sing rabindrasangheet, he got an opportunity to perform a couple of songs for the singing class students. See photos from the Fine Arts departments below. 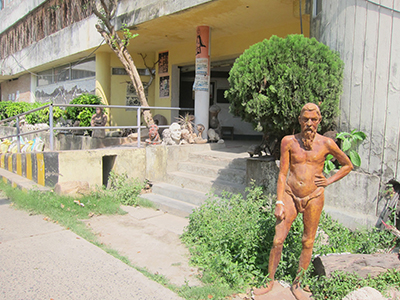